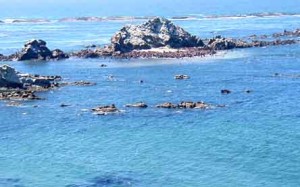 In September of 2003, new interpretive panels and a way-finding kiosk were installed at the Simpson Reef overlook south of Shore Acres. The project was the culmination of a long planning process, which also included the construction of a new parking lot and viewing platform. Partners in the project included the U. S. Fish and Wildlife Service, the Oregon Parks & Recreation Department, Friends of Shore Acres, Inc., Shoreline Education for Awareness (SEA), Bureau of Land Management, the Oregon Department of Transportation. and the Federal Highway Administration. 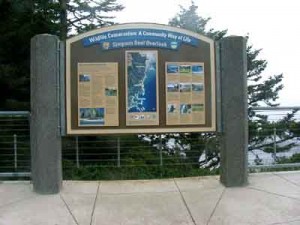 From the overlook, located in Cape Arago State Park, visitors enjoy breathtaking views of Shell Island and Simpson Reef, part of Oregon Islands National Wildlife Refuge. Simpson Reef is one of the few places on the Oregon coast where visitors can literally see thousands of marine mammals. The overlook is fully accessible and has three permanent benches.

Shoreline Education for Awareness (SEA) Docents are present from 10am – 4pm on Saturdays, Sundays and Holiday Mondays from Memorial Day thru Labor Day.

One of the new interpretive panels provides visitors with tips on identifying and locating the four species of pinnipeds (seals and sea lions) that regularly haul out on Shell Island. A second panel provides detailed information on the life history of the harbor seal, norther elephant seal, Steller sea lion, California sea lion and California gray whale, species regularly seen from the Simpson Reef Overlook. The way-finding kiosk will direct visitors to other sites within the vicinity where they can enjoy natural resources or historic places. For unparalleled views of Oregon’s spectacular coastline and even rarer glimpses of its marine life, visit Simpson Reef Overlook any day of the year. 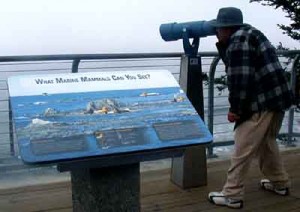 You will find a links to some of the project partners on our “Links” page. 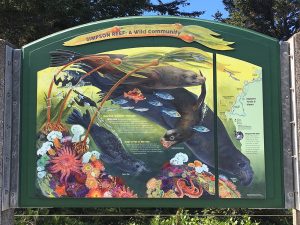 In June of 2018, the Simpson Reef Overlook interpretive signage was replaced in partnership with USFWS and by funding from the New Carissa oil spill settlement. Simpson Reef was one of 35 sites selected along the Oregon Coast that met criteria for new interpretive signage. Dawn Harris of USFWS, Brian Fowler of OPRD, and other USFWS and OPRD staff compiled a list of sites and decided on interpretive content to be included in this project. 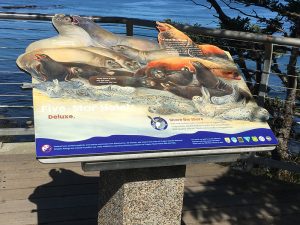 Background: This project was made possible by the Natural Resource Trustee Council for the 1999 New Carissa Oil Spill. The New Carissa was a bulk freighter that ran aground near Coos Bay, Oregon, spilling 70,000-140,000 gallons of heavy fuel oil and diesel into the marine environment. Federal, State and Tribal natural resource agencies collected 1,085 bird carcasses over the course of the incident. Computer modeling estimated that a total of 2,465 seabirds and waterfowl were killed by the spill, primarily Cassin’s and rhinoceros auklets, common murres, Brandt’s cormorants, surf scoters and northern fulmars.

As a part of the New Carissa oil spill settlement, the U.S. Fish and Wildlife Service is charged with implementing a public education project aimed at the protection of seabirds and marine mammals along the Oregon coast. The objective of the program is to design, fabricate and install regulatory signs and, where appropriate, interpretive panels at public access points where people could potentially disturb seabird colonies or marine mammal haulouts and other marine resources managed by the USFWS.

The primary goal of this project is to inform visitors of the protected status of Oregon Islands National Wildlife Refuge and its resources. This project involves identifying key locations along the Oregon Coast that lead visitors to or near seabird colonies or marine mammal haulouts. Those sites will then be posted with signs/interpretive panels that inform visitors that the nearshore rocks and islands are part of the refuge system and are closed to public access. The signs will also educate the public about the need to protect nesting seabirds and marine mammals from human disturbance. Many of the sites are located within state parks and are immediately adjacent to major and minor seabird colonies. Other sites will be selected based on heavy (300k+ annual visitors) public use.

Site and Sign Selection particular to Simpson Reef: The overarching theme of this project is “The iconic sea stacks of Oregon Islands National Wildlife Refuge teem with seabirds, marine mammals and tidepool life in a rich and remarkable community sustained by one of the most productive ocean edges on Earth. Every person who visits the coast can take actions to help this rugged, yet vulnerable community thrive.” Additionally, this projected stated its goal as helping visitors “see the island rocks all along the Oregon coast as life-filled communities that are delicate, wondrous and worth protecting.”

What You Can See 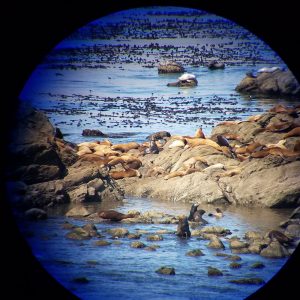 Simpson Reef overlook provides a view of an extensive rocky intertidal area, kelp forest and numerous small rocks and islets. The reef is one of the most outstanding locations on the west coast of the US to observe marine mammals. Five species of pinnipeds use this site as a haul out. Two species (Harbor seals and Northern elephant seals) are known to breed there. It is a major migratory, resting and non-breeding area for California sea lions and Steller (northern) sea lions. In the spring and fall seasons, the rocks and Islands of the reef complex can host several thousand seals and sea lions, and numerous species of diving ducks aggregate here. With binoculars or a spotting scope, the area just beyond the reef is an excellent place to observe the northward migration of pacific loons that stream by the reef for several weeks by the thousands. 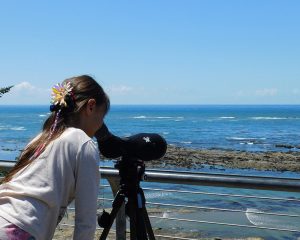 Migrating and summer resident Gray whales are frequently observed here. In addition, Killer whales and Blue whales also are observed from this location. Clearly, Simpson Reef is a very valuable and incredible site that ties in nicely with the theme and goal of this project.

Dawn Harris from USFWS, Brian Fowler from OPRD, and John Peters of Interpretive Graphics worked in collaboration to develop and install the interpretive content and signage at this site. 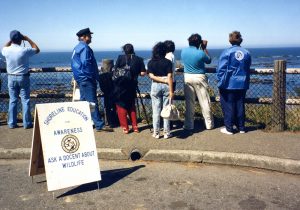 Since the summer of 1991, volunteers from S.E.A. (Shoreline Education for Awareness) have provided education and interpretation at Simpson Reef Overlook. To help their efforts, Friends of Shore Acres Inc. provides an interpretive brochure that also is available at Shore Acres and local visitor centers.