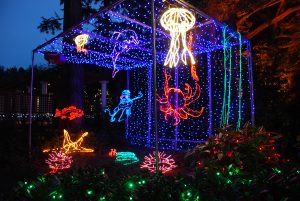 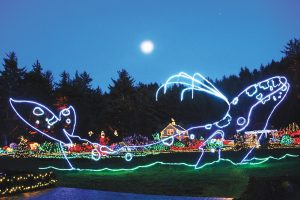 The brightest and most beautiful place on the West Coast shines as brightly as ever this season.

A community tradition was born in 1987 when the Friends of Shore Acres decided to “string a few lights” to help celebrate the holidays. That first season, 6,000 miniature lights, one Christmas tree, and the decorated Garden House drew 9,000 visitors.

Now, at least 325,000 lights (mostly LED), 30 large landscape lights, dozens of small landscape lights, 30 large holiday trees, dozens of lighted sculptures, and a beautifully decorated Garden House draw – on average – 50,000 to 70,000 visitors each season. Numbers vary with the weather. Inside the Garden House, scrolls of names are a tribute to business supporters, members and the more than 1,500 volunteers who make it happen.